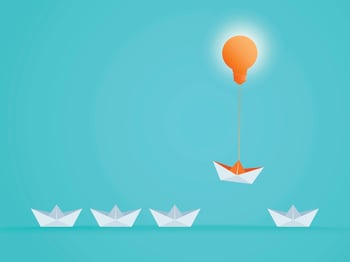 The other day I was explaining the results of a change readiness assessment to an executive and shared a piece of news he found disturbing. He believed that everyone wanted the change that he was leading because when he spoke with others in the organization about it, they all told him it was a great idea.

Emperor . . . you have no clothes, I explained.

I told him that in my conversations with those same people, they had quite the opposite opinion.

“But why would they tell you something different than they tell me?”

Because you are the emperor.

“I can’t believe this! It’s insubordination!”

You ARE the emperor, I thought.

He turned to look at the one VP that he brought to our meeting. She had been vigorously nodding in agreement with every word he said. He ordered, “We need to set up a meeting so I can set this straight. We’ll stay in that room until we have agreement that we are moving forward with the change.”

I’ll bring the balloons, I thought.

Change doesn’t have to be so serious. And it certainly won’t stick when implemented by coercion. There is nothing like a little fun to make change happen.

Several years ago, Volkswagen launched a campaign called “Theory of Fun”. I’m sharing it to emphasize the point that change – even radical, transformational change – can be fun. It should be fun because . . . well . . . life’s too short.

The secret is identifying how to draw out people’s intrinsic motivation to change. It’s about how we encourage people to decide, of their own free will, that they want to change.

According to study published in the Journal of Physical Activity and Health, researcher Megan Grimstvedt and colleagues placed signs near the elevators of 4 university buildings in San Antonio, TX. The sign said simply, “Walking up stairs burns almost 5 times as many calories as riding an elevator” and included an arrow directing people to the nearest staircase, as well as a cartoon of the school mascot walking up a flight of stairs.

The results were impressive:

Overall, the signs increased staircase use 34%. What’s more, the increase persisted four weeks after the researchers removed the signs.

Imagine the results if they had added a keyboard!