We’ve come a long way, ladies! We haven’t quite reached the end of our journey to close the gender gap or achieve broader inclusivity overall, but we have made—and are still making—progress. 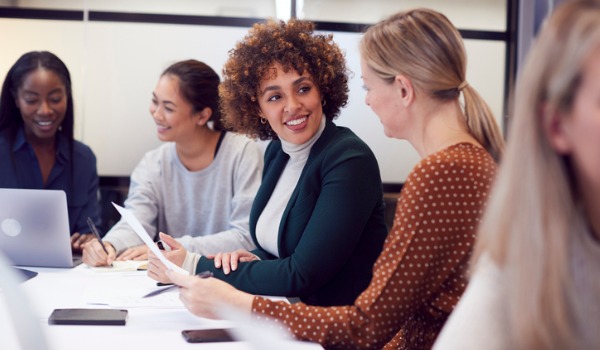 No longer are moms of athletic daughters telling them to “make sure they let the boys win,” as they did during my tween years as a competitive swimmer. Vivid memories remain of the day I stood on the starting block readying for a 25-meter freestyle race against four boys. There was no way I was going to let them beat me, so I swam my heart out and splashed to a win by a quarter body length. Walking towards the bench to pick up my towel and enjoying a sense of accomplishment, a group of swimmers’ moms stopped me and said “Karen, you’re supposed to let the boys win. You don’t want to embarrass them.” I wanted to blurt out “not me!” but also knew I would get in trouble for talking back to the adults, so I just smiled and moved on. Meanwhile, my dad, who was my best life coach ever, overheard the conversation and said “Don’t listen to them. Always be the best you can be and do your best.”

Gone, too, are the days of taking career-determining preference tests in high school, and the only results for young women were to be nurses, school teachers, or “secretaries,” no matter how great you were at math and science. Decades ago, when a young man in my class answered the test questions exactly as I did, his career opportunities were accountant, lawyer, engineer, banker, chemist, and many more. My mind was screaming “that’s just not right. It’s not fair. I’ll show them.” I decided in that moment that I wouldn’t accept the biased results and continued to pursue my goals. I went on to finish college with a double major in communications/journalism and consumer economics, immediately starting the job of my dreams: a news reporter.

Fortunately, the gender bias gap is narrowing, and women and men can explore whatever career dreams their hearts and minds desire.

The journey to the “top,” regardless of how you define the top, is lined with rewards and penalties. When women win, we celebrate together and cherish the advancements. When we don’t win, we don’t cry, despite what society traditionally expects of women. Instead, we band together, evaluate our lessons learned, and collaborate on a new path forward to achieve our goals.

Plenty of research, both in the US and globally, indicates that female leaders still face the need to be warm, nice, and caring, validating traditional social expectations for women. Strikingly, those same data also say female leaders need to be competent and tough, traits society typically expects from men. A challenge arises because these two sets of characteristics appear contradictory given social norms, creating a dilemma for women. Carly Fiorina, HP’s former CEO, may have described it best: “In the chat rooms around Silicon Valley, from the time I arrived until long after I left HP, I was routinely referred to as either a ‘bimbo’ or a ‘**tch’ – too soft or too hard.”

Changing these societal expectations is just one of the many bumpy roads on our journey, so until we can level the thoroughfare, we will need to continue to take the helm and manage these tensions. It’s all about being that competent, warm, nice, caring, and tough leader simultaneously. In other words, it’s getting the right results the right way.

Earlier in my career, working the second leadership role of my career in the male-dominated nuclear utility industry with a command and control leadership environment, I realized very quickly the importance of achieving business results. I was consistently exceeding the company’s performance targets. It wasn’t until I received feedback about my leadership style that I realized how the results were achieved was as important as the results themselves. The feedback indicated the competent, warm, nice, caring traits were apparent, but I had taken tough to a whole new level, and it wasn’t good. While my intent was to encourage exceptional achievement (safe, quality business results), the impact was creating a high-pressure, de-motivating environment because of what was perceived as unrealistically high performance expectations. Now, I have learned how to simultaneously encourage exceptional achievement on business results and create a work environment with a high degree of inspiration and passion for what we do.

In the United States, women were nearly half of the labor force, but only slightly over a third of managers in 2019, according to a report from the 50/50 Women on Boards organization. This report also noted that if first-level female managers were hired and promoted like men, there would be one million more women in management over the next five years. One of the most exciting rewards along this journey is more recent research that shows the pervasiveness of males in senior leader roles is not a product of superior leadership talent in men. Rather, these expansive studies with detailed analytics indicate gender differences in leadership talent are either nonexistent or actually favor women. Let’s disseminate this data more widely and encourage leaders to expand women’s opportunities and help them become future leaders.

As we celebrate Women’s History Month, let’s work together to:

Post author Karen Gorman finds reward in achievement. But, unlike many with that characteristic, Karen differs in that she feels most fulfilled when her accomplishments benefit those around her, whether that be a cause, a person or an organization.

As ALULA’s Chief Executive Officer, Karen believes her principal responsibility is to define, model and advance a culture that ensures the business and people thrive in a dynamic, quickly evolving marketplace. Her greatest motivation is contributing to the success of others fueled by an innate professional need to provide ongoing and increasing value to the entire organization, clients and shareholders.