4 Ways To Deliver Feedback That Gets Results 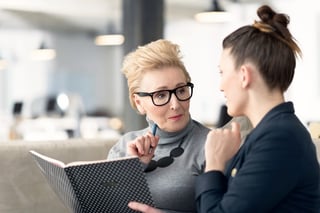 "Let me give you some feedback."

That's the beginning of many uncomfortable conversations we’ve all experienced at some point in our careers.

Unfortunately, in these situations, the term “feedback” is often used synonymously with “constructive feedback,” which, in turn, is often just a way to make negative feedback sound more helpful than it is. As a result, before you’ve had a chance to say what you’ve actually wanted to say, you’ve already drained some of the effectiveness out of the interaction that follows.

So, then, what is the key to giving effective feedback? Here are four ways you can ensure your feedback has the intended effect.

1. Check your motives for giving feedback.

Why do you want to give this feedback? What’s your underlying feeling about the person and the situation that may influence how you present the feedback?

For example, if you’re walking into a conversation annoyed, your feedback will likely reflect this underlying sentiment in the words you choose, and the tone each word carries. Exploring why this person’s actions affected you the way they did will allow you to determine the value in giving this feedback in the first place.

Maybe it is worth this person hearing your feedback as an opportunity for growth or an improved relationship, or maybe giving this feedback is all about you feeling better about yourself. Be honest with yourself before potentially wasting a valuable feedback opportunity.

2. Align your behavioral and verbal cues.

If you want any feedback conversation to be productive, it’s important that your behavioral cues and the words you say are aligned and indicate that you’re being genuine.

Ensure that despite how difficult your feedback is or isn’t, the other person ultimately knows that you’re on their side, and that you’re not “out to get them”.

To do this, choose your words carefully, and think about whether your words and body language really communicate the same message.

3. Know the difference between positive, negative and constructive feedback.

Most of us know what positive feedback looks like. But, many of us get negative and constructive feedback confused.

Every feedback tip, trick or tool out there will tell you to be specific about the feedback you’re about to provide. But how do you know whether you’re being specific enough to be effective?

One way to ensure the right level of specificity is to think about what exactly you observed that person doing that gave you the impression this person needed feedback. If you were to capture this moment on video, what exactly did you see? How can you describe that moment? Don’t be tempted to interpret the observation through personal emotions, guesses about context, or by using labels that describe what you think happened. Be as objective as possible in describing what you’ve seen or heard.

b. Describe the Impact.

Often the person you are giving feedback to isn’t clear about the broader impact of their actions, and why that matters in the big picture. Helping them understand the impact their behavior had on you, on others, and on results or the organization paves the way for a deeper conversation about the necessary change.

Just because you want to or have to give feedback doesn’t mean you’re right and the other person is wrong. Be sure to ask questions to help you understand why the person did or said what they did. It probably made sense to them at the time, so find out why. While you ask the context questions, make sure to listen with an open mind (rather than with an intention to reply).

An effective feedback conversation ensures that both people get a chance to contribute to the conversation and make their points. Why? The more you talk and tell, the less ownership the other person will take in making any kind of change.

e. Focus on what to do next.

At the end of every effective feedback conversation is a commitment to action (the ‘now what’ part of the conversation). Actions can include continuation of what’s been working well, and/or an agreement to stop or do less of something and replace it with a more productive behavior.

Make sure you continue the dialogue-driven conversation at this part of the feedback session. If you’re just telling the person what to do differently, without verifying alignment and commitment, you’re setting yourself up for a failed feedback conversation.

Evaluate your feedback delivery skills by downloading our Feedback Effectiveness Checklist. Click below to download your copy now.