How to Cultivate Team Culture to Produce Extraordinary Results

Have you ever been on a team that feels like it is stuck in a loop? Trapped in a cycle of ineffectiveness or mistrust? Have you ever wondered, “How did we end up here?”

Well, you’re not alone. At ALULA, we often encounter companies and teams trapped in cycles that hampers progress and ultimately leads to frustration and disengagement. In a recent Harvard Business Review article “6 Signs Your Corporate Culture Is a Liability” the author states, “Executives are under intense pressure to deliver results and far too many are rewarded on what they achieve without factoring in how they achieved it…almost one-third of employees say that their leaders don’t behave in ways consistent with company values.” How the leader leads in a team setting and how the team works together (or fails to) is exactly what determines the level of team cohesion the team experiences. 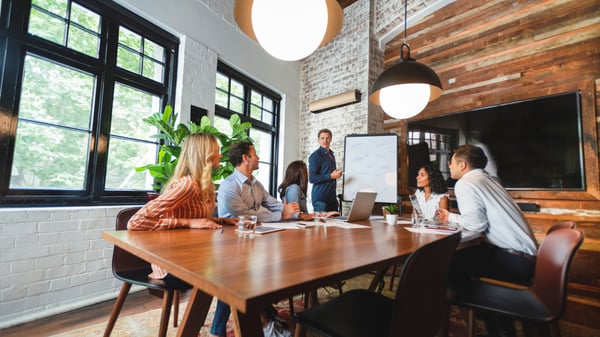 In our experience, teams get into a rhythm for how they work together and either subconsciously or consciously accept it as the way it is. I once had a client say to me, “You know why we had that conversation in there today? Because six months ago we talked about the same thing and now not everyone is sticking to that agreement. No one wants to say that though.” In other words, teams tend to work around the culture rather than on the culture.

So, what is team culture?

And how do you cultivate culture in a positive way to produce better results?  At ALULA, we define culture as a pattern of behaviors that are reinforced or discouraged by people and systems over time. In other words, individual members of the team tend to interact in similar ways with each other that reinforces and discourages certain behaviors of others. Over time, these dynamics become habit. It’s the reason you can accurately guess how someone else will react to an issue or how likely the team is to meet a specific deadline or goal.

Teams that wish to improve their performance should consider their habits as a team. As a team you need to ask yourselves:

By analyzing these habits as a team, you’re opening the door to identify the exact patterns that if changed could dramatically improve performance.

I once worked with a team that demonstrated the most honest, supportive and performance-focused culture I’ve ever seen. The team was an Emergency Medical Response flight team for a petrochemical company operating in the Gulf of Mexico. I was able to get a firsthand look at their team’s culture after attending one of their post-flight debrief meetings.

One by one the team slowly gathered in a cafeteria-style conference room. As they came in, some still in gear, they immediately began to vent, laugh, and empathize with each other. One wiped his brow and lamented about a few moments during the flight that had really worried him. Another asked for clarification on a turning point where he had followed a team member’s direction but hadn’t fully understood the rationale. One guy teased the other for what he considered “a typical Jerry move” during the flight which was followed by what I assume was likely a “typical Jerry retort”.

When the manager entered the room, he congratulated the guys and acknowledged the stressful moments during the run. At one point, he dropped his voice a bit to describe how proud he was to be part of what he considered to be one of the best EMR teams he’d ever seen. I felt the shared pride of the team just before a guy in the back interrupted the moment by teasing the manager about “getting all mushy”.

It was clearly a comfortable, trusting and safe environment for the team to regroup on the day’s events and the role that they each had played. Perhaps the best part was the natural style and rhythm of the conversation. The team spoke openly and plainly about the risks they faced, the uncertainty they felt, and how they would handle the situation differently in the future. None of this dialogue was formally organized or formally prepared. They poked fun at each other, quietly recognizing as well as correcting one another. None of these team members were following an agenda designed to explicitly reflect, learn and support. It came naturally to them and they reinforced it within each other. If anyone new were to join that team, they would quickly learn during those debriefs and feel safe to do so. Moreover, the team had a leader who not only provided a clear vision, but did so through inspiration rather than instruction. As a result, they were able to learn faster and with greater precision allowing them to make even better decisions as a whole on a day-to-day basis.

This team was consistently focused on how they worked together because the success of their flights depended on it. But what team’s outcomes aren’t? Focusing on the how also required them to be supportive of each other in order to trust they wouldn’t be penalized socially. In other words, the ability to speak openly and plainly required the team’s overt support for one another. Lastly, the team knew precisely what they were trying to accomplish including how they would accomplish it given the leader’s explicit vision for them as a team.

I’d be remiss if I didn’t summarize the characteristics of this team’s culture in three simple points:

It’s almost impossible not to work as part of a team or even across multiple teams these days. If you feel as though your team’s culture could be better, consider what patterns of behavior are being intentionally or unintentionally reinforced. What habits are helping you work well together, and which might be holding you back? By identifying these patterns you’ll be able to find the best ways to improve your team’s culture and ultimately its performance.